Tocal is located in the lower Paterson Valley of the New South Wales Hunter Valley. The Hunter River is the state’s largest single coastal river system, covering an area of 22,000 square kilometres. The Hunter River system passes through the Great Dividing Range in one of the few east-west breaks in the range. This break marks the geological border in the Great Dividing Range between the Carboniferous mountains to the north and the Sydney sandstone basin of the Permian era to the south.

The Paterson River is one of several tributaries to the Hunter River. Each of these rivers flows from the Barrington Tops (on the southern end of the Carboniferous mountains) into the Hunter River. The valley floor contains relatively recent (around 6,000 years old) alluvium from the Quaternary era.

The rim of the Webbers Creek valley rises about 300m above sea level (the peaks of Tocal are around 200m). This rise is the first encountered by maritime air masses moving west from the coast, often creating violent thunderstorms within the Webbers Creek catchment. The Webbers Creek catchment has a noticeably higher rainfall than the areas to the north, south and west. This, combined with the long narrow Paterson catchment and the tidal nature of the Paterson River below Tocal, means that Tocal experiences regular flooding in areas below 10 metres. 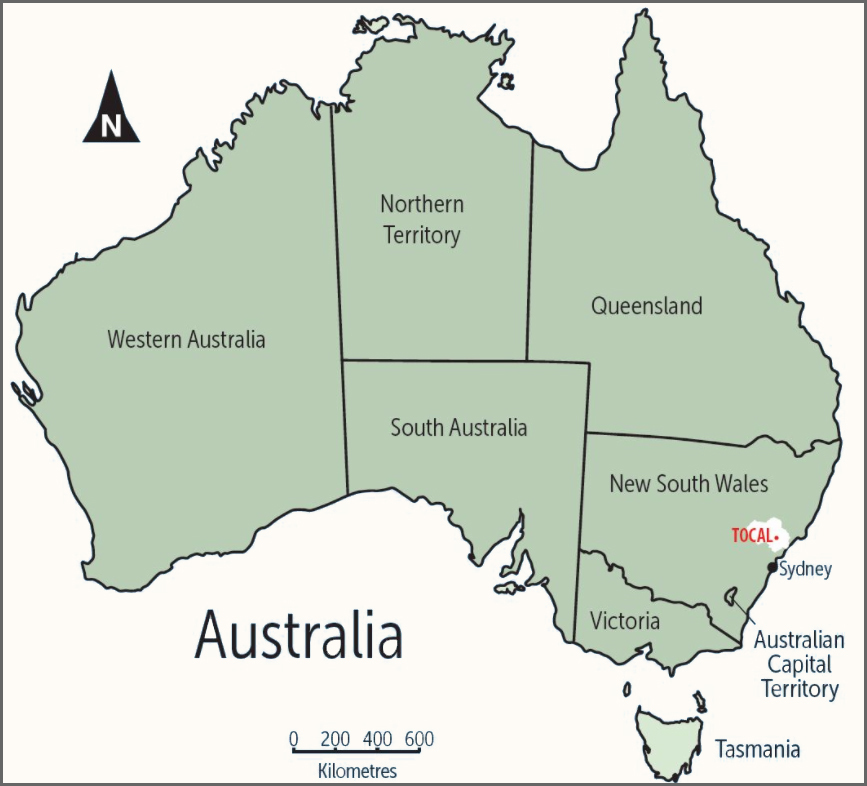 Reliable and high-quality stock water is required for each paddock on Tocal. The property is fortunate in having areas of wetland, lagoons, creeks and the Paterson River as natural water resources. These water bodies, however, can be easily degraded by poor management, and the results of past misuse are evident.

As a general rule introduced pastures are concentrated towards the front of the property - the area closer to the Paterson River including river flats and gently undulating land, and native pastures at the back of the property - further away from the Paterson River and including hillier landscapes that contribute to the catchment. The current management objective is to maintain a balance between the two so that we can take advantage of both the adaptive nature of native species to environmental conditions and the higher productivity potential of introduced species. This graph shows both average monthly rainfall and the median at Paterson/Tocal. The average is calculated by adding rainfall totals for each month over the period from 1965 to 2006 and dividing by the number of years. This figure can be misleading, because a couple of very low or very high rainfall years can alter the average significantly. A more useful figure to use for farm planning is the median. Median rainfall is calculated by ranking totals from highest to lowest, the middle figure being the median. The median will often be lower than the average, and is a more realistic figure to use, although it is not often quoted in rainfall statistics.

Paterson’s proximity to the coast affects its temperatures by reducing extremes. The area does not receive the intensity of hot days in the summer and cold nights in the winter compared to the Upper Hunter Valley. It is, however, far enough inland to receive some very hot days (>35°C) in most summers and some frosts in most winters.
The following graph shows the average monthly temperatures at Tocal. They indicate a fairly mild climate with few extremes on average. 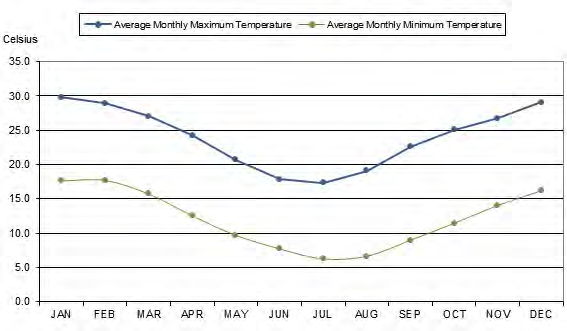 More details on Tocal's weather and climate are available here.

The beginning of 2019 was a continuation of the drier than average conditions experienced through 2017 and 2018. The rainfall distribution across 2019 shows occasional good falls with long dry periods between. January and February were 70% below average rainfall, however, improving in March. This pattern repeated itself throughout the rest of the year.

High temperatures, very low runoff and windy, low humidity conditions in Spring and early Summer led to real concerns regarding water right across the farm. From 1st October to the end of December, a total of 45.4 mm of rain was recorded with one fall of 24.8mm on the 4th November and just 2.0 mm in December. The low rainfall combined with four days over 40 degrees left Tocal in a condition not seen before.

Tocal is considered a very safe farm for water, relying on a number of creeks, streams and over 25 dams. The dairy has very reliable access to the Paterson River and much of the College precinct and surrounds has town water but for the rest of the farm the situation became more critical as the year progressed. Numeralla egg farm relies on one large dam for all water and the dam dropped to below 40% capacity and a daily check was required.

Towards the end of January the rains came and rainfall so far this year is 789.4 mm, with rain distributed well every month. This has completely changed the water and feed situation on Tocal. All dams are full, creeks and streams are flowing and Lostock Dam, at the head of the Paterson River, is now at 100% of capacity. With a mild winter and good soil moisture this is a good start to spring. The long-term prediction from the Bureau of Meteorology is for a warmer and wetter than average spring and summer. It will be time to take full advantage of the return to good seasons.

People are an invaluable resource on any farm and probably even more so on Tocal. We have an important role in agricultural education, in our local community, as NSW government facility and as a producer of high-quality beef, eggs, milk and horse breeder.

People, products, services, and ideas flow into and out of Tocal and are influenced by the site and the industry in which we operate.
Nine staff members work full time on the farms. They are supported by up to ten casual staff and teaching staff. They are responsible for students who are rostered on for practical work during term.

These are made up of:

The central role of Tocal farm enterprises is to provide the foundation for full time student training, education delivery short courses, industry training and farm visits from schools and the general community and to support DPI research initiatives.

Each week of the student year between 25 and 35 students are rostered onto the various farm enterprises. The students from Cert III and IV Agriculture and Cert III Horse husbandry courses complete a range of practical and skills that support the theory training associated with the course providing a balance between theory and practical skills development.

The following tables summarises the roster hours for 19 practical and skills weeks on the farm enterprises for Tocal students in 2018.

The Tocal site includes offices of the NSW Department of Primary Industries, Local Land Services and Tocal College. Staff and students from these areas amount to around 100 people.

State government plays a role mainly in compliance matters particularly in relation to:

The federal government influences management of Tocal indirectly including the impact on the economy and exchange rate of government decisions and international agreements and by lobbying for the removal of protectionism. Their direct influence is through compliance issues. The Australian Competition and Consumer Commission also has the power to influence dairy industry profitability but has not yet exercised this power.

Industry trends, innovation and the social licence of farms to operate are also factors that are people based and can have significant impacts on the management and productivity of Tocal.

Revenues from the farms for 2019-20 Financial year were:

The total farm revenue is a creditable $3,176,649. This income pays for all variable costs of production and some improvements. It also contributes significantly to, but does not cover, all site overheads for the Tocal College farms.

In addition to the normal risks that businesses face, rural properties and farming activities often face additional risks that go beyond the farm gate and boundary fence. Rural land should be managed with care and responsibility to minimise risks to the enterprise, humans, livestock and the environment.