Weather and climate at Tocal

Tocal receives more summer rainfall than winter. In January to March there is more than twice the rain of July to September. There are only slightly more rain days in the summer/autumn period, however there are more thunderstorms in summer, bringing heavier falls. Most summer rainfall comes from storms caused by moist air extending southwards from northern Australia and east from the Tasman Sea. Winter rainfall is mainly caused by cold fronts from the mid latitudes. The development of low-pressure systems in the Tasman Sea in winter can also bring heavy rain and strong winds (see wind).

The lower monthly rainfall figures from July to September are made much worse by the incidence of strong westerly winds causing high evaporation rates. The district rarely receives really good rainfall in spring compared to southern New South Wales. Reliance on the ryegrasses and clovers as the main feed source is therefore difficult and explains the need for summer growing species such as kikuyu. 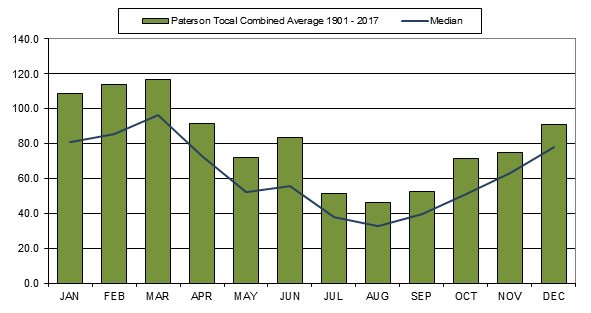 This graph shows both average monthly rainfall and the median at Paterson/ Tocal. The average is calculated by adding rainfall totals for each month over the period from 1965 to 2006 and dividing by the number of years. This figure can be misleading, because a couple of very low or very high rainfall years can alter the average significantly. A more useful figure to use for farm planning is the median. Median rainfall is calculated by ranking totals from highest to lowest, the middle figure being the median. The median will often be lower than the average, and is a more realistic figure to use, although it is not often quoted in rainfall statistics.

When looking at long-term trends, it is more accurate to use figures from afar back as possible.

The graph clearly shows above and below average periods, with three periods of lower than average rainfall and from 2006, a higher trend. 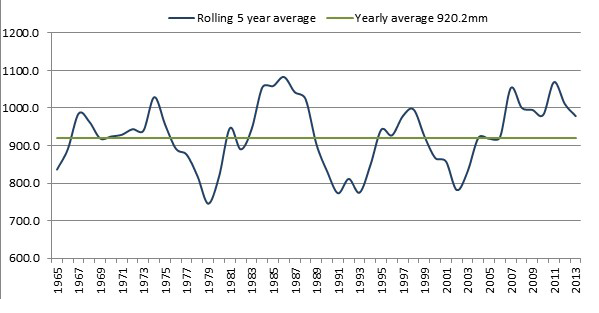 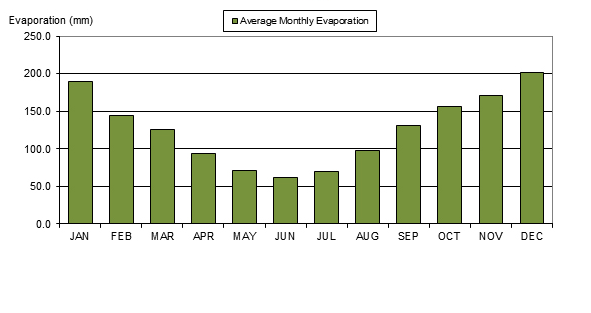 Irrigation schedules are used to ensure efficient water use. Using moisture budgets, a farmer can ensure that water is applied to a crop or pasture when it will be of most benefit. Moisture budgets are calculated using rainfall and evapotranspiration.

Evapotranspiration is used because while effective rainfall is a good indication of Tocal property and farms (2021 update) 12 seasonal conditions, plant water use needs also to be considered. Evapotranspiration combines water used by plants as well as water lost from the soil through evaporation.

Plant water use is influenced by environmental conditions, including wind, temperature, humidity and solar radiation. If conditions are hot, dry and windy, crop water use and evaporation will be high. However, if the day is cool and overcast, water use will decrease. The chart below shows the evapotranspiration measurements and trends at Tocal in 2003. Paterson’s proximity to the coast affects its temperatures by reducing extremes. The area does not receive the intensity of hot days in the summer and cold nights in the winter compared to the Upper Hunter Valley. It is, however, far enough inland to receive some very hot days (>35°C) in most summers and some frosts in most winters. 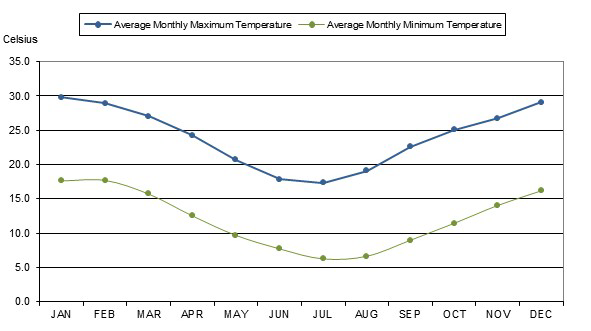 Severe frosts are uncommon at Tocal. When they occur, they are associated with stationary high-pressure systems and still, dry air in mid-winter. The frost figures show that, as expected, July experiences the most frosts, with August the next most frost-prone month.

The Paterson district receives quite a lot of windy days, an important factor to be considered when planning agricultural enterprises. This first graph below shows that the strongest winds occur between June and September. Winds coming from the north-west or west in September and October are beginning to warm up, and can quickly ‘burn off’ the spring flush of white clover. This important pasture Tocal property and farms (2021 update) 14 legume is an important feed source in summer, but can almost disappear in the face of these hot north-westerlies. It is also important to look at the direction that wind comes from and the number of windy days in the year. Westerly winds blow at Tocal from May to September and easterly winds prevail during the rest of the year. Winds bringing rain are mostly from the south and east from over the ocean. West winds are usually very dry by the time they reach Tocal as they have lost any moisture they may have had in crossing the Great Dividing Range. In summer, a sea breeze often reaches the area by mid to late afternoon.

The following graphs, described as wind ‘roses’ are representative of the wind occurrences recorded automatically by the Bureau of Meteorology. Note that they do not represent the strength of the wind, but the number of times wind came from that direction. So, for example, in March, the wind came from a south-easterly direction on about thirty occasions. Only two representative samples of months have been noted here because they illustrate the change in wind direction through the year. Tocal experiences irregular summer wind storms that have been responsible for significant damage to buildings and infrastructure from time to time.

More information about the weather and climate at Tocal is available here.